Improved SCR performance is to be achieved with effective urea mixing. SCR technology uses ammonia in the form of a urea-water solution (DEF/AdBlue®) as a reducing agent for catalytic reactions. Especially when an airless injector is used, the urea solution has a tendency to form deposits (urea crystallisation) during evaporation and decomposition into ammonia.

An efficient mixer is required to prevent the build-up of deposits and to obtain good uniformity in the catalyst cell. Especially in limited-space applications and in real driving cycles that include slow driving with low loads, the high NOx reduction targets of today's regulations cannot be achieved without efficient urea mixing. The key to solving mixing problems is to have an effective urea mixer such as the Proventia SuperTornado™. 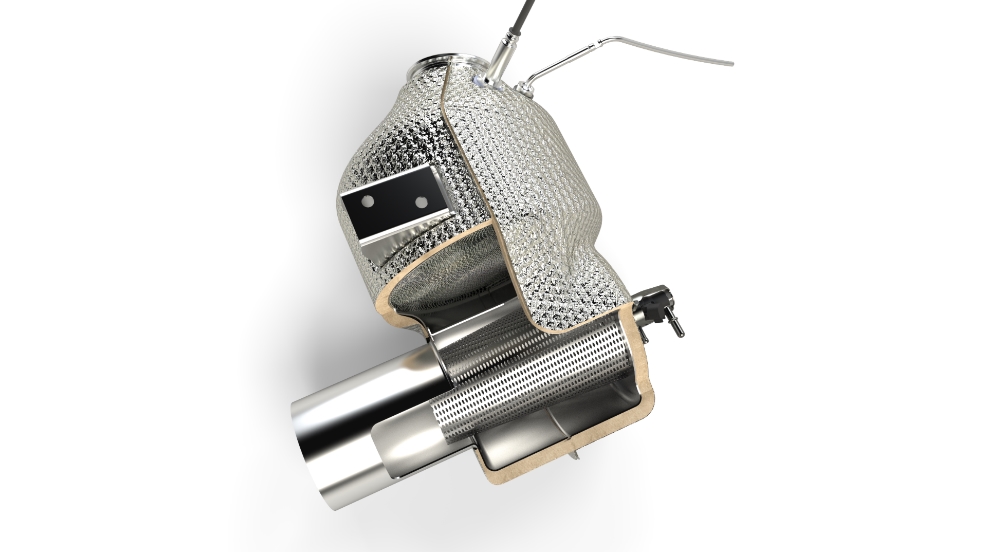 Proventia SuperTornado™ urea mixing technology is a flexible platform that can be used with various urea dosing systems to solve deposit problems and improve SCR performance in many applications with different engine sizes and in a variety of operating environments. The Proventia SuperTornado™ enables the design of compact EAT systems for applications with limited space requirements. The system can be integrated with DPF substrates if the chosen emission strategy requires DPF.

How does it work?

The Proventia SuperTornado™ urea mixer has two separate swirling concentric flows. Urea is injected into the central flow, where the small droplets evaporate, and the bigger droplets travel further down the mixer to where the two flows meet. When the droplets reach the stronger outer flow, the velocity difference between flow and droplet increases rapidly, resulting in a high evaporation rate. With SuperTornado™, evaporation and mixing are effective, leading to ammonia uniformity values exceeding 0.99, allowing more precise amounts of urea to be injected into the exhaust gas – even at lower temperatures. This eventually results in increased NOx reduction and the best possible use of SCR catalyst chemistry.